My Spring graduate seminar at William & Mary on the histories of families in the Early Modern Atlantic World takes up a historical challenge that’s familiar for me, and yet evergreen.  I’ve been reading, thinking, teaching and writing about family history and the intersections of gender, family, and sexuality for more than a quarter of a century.  I started reading family history in a seminar with Toby Ditz when I was in graduate school at Johns Hopkins, and have been talking intensively about comparative issues with some of my fellow JHU students, especially Julie Hardwick, and other colleagues since the 1990s.  With Julie and Bianca Premo I published in a cluster in History Compass, “Rethinking Family, Gender, and Sexuality in the Early Modern Atlantic World” in 2010, and in 2013 Julie, Sarah Pearsall and I introduced and guest-edited an issue of the William and Mary Quarterly that followed a 2011 Omohundro Institute conference at the University of Texas. 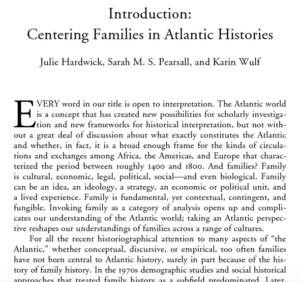 You think I’d have come to some firm conclusions about family history by now!  I have, but they are mostly about the importance of continuing to explore the complexity of family.  Our introduction to  the WMQ issue on “Centering Families in Atlantic Histories” began with the observation that “every word in our title is open to interpretation.”  Perhaps none more than family and families.  I’m also very clear about the significant relationship between “family” (and here I use those startle quotes to indicate just how historically complex and yet how often flattened for strategic purposes that term is and has been) and the state.

As a field family history has a history and my seminar begins there, in interrogating the legacies and echoes of work by Lawrence Stone and others.  Doubtless a product of the ways I first began to grapple with issues around family, gender, and sexuality we also read a lot of comparative early modern European and colonial British American histories.  I still teach Lyndal Roper’s study of the gendered politics of the reformation The Holy Household: Women and Morals in Reformation Augsburg, for example.  Every time I read it I think about the issues around religion, morality, and gendered forms of civic discipline in new ways.  Lots of new work also informs the syllabus.  Questions about how archives shape what we know and how we know it have been important in many of my classes, but especially so in this one.

As I finalized the reading list this year I wondered if the basic premise (begin with the Stone age) would finally seem unworkable by next year.  Issues and subjects that were formative for me almost thirty years ago are still important, but need to make room for the challenging questions that are shaping the field and my own thinking now.  We shall see.

Meantime, check out the syllabus:  Spring 2017 HIST 715.  Then let me know what you think.  I’d love to hear suggestions about  ways that you would rearrange the topics, change emphasis, and add or subtract readings.  It’s too late for the students in #AtlFam17, as this seminar is stuck with what I’ve assigned, but I’m pretty sure that in addition to me, they and others will be interested in the feedback.

NB January 28, 2019:  I’ve added an edit to this post to include the syllabus for  Spring 2019 HIST 715.   When I taught the course two years ago I thought by this year I would kick out the Lawrence Stone/ Eurocentric framing.  I think that’s out as a frame (“family history as a field begins here”) but it remains as a key artifact allowing us to interrogate the way new work should be able to eclipse the old, but old work should still instruct (either as subject material– I will never not teach Lyndal Roper– or as interpretations that still lurk in unexpected places –that’s Stone).  We also spent some time discussing Judith Bennett alongside Imani Perry’s ideas about patriarchy as a modern liberal construction vis a vis Locke and Adam Smith.  I can see next time starting with Perry’s book (just out in Fall 2018, I was using excerpts from the book she published in the Southern Journal of Philosophy ) and assigning chapters of Bennett.

Reading #VastEarlyAmerica in the Georgian Papers