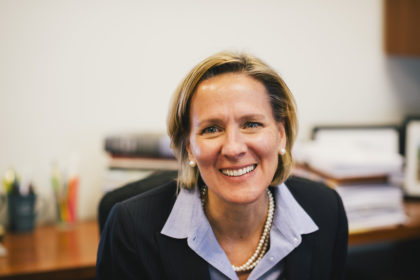 I’m a historian of early America.

I’ve researched and written about women, gender, and political culture in eighteenth-century British America.  My first book, Milcah Martha Moore’s Book:  A Commonplace Book from Revolutionary America  is co-edited with literary scholar Catherine Blecki.  The astonishing collection of prose and poetry that Milcah Moore collected and transcribed richly reveals the complex political lives and thoughts of her circle of friends, family and associates in eighteenth-century Philadelphia and the wider mid-Atlantic region.   My second book, Not All Wives: Women of Colonial Philadelphia, argues that marriage was a fundamental category of identity and experience for eighteenth-century women; I looked closely at the lives of unmarried women in the largest city in British America to see how they navigated their cultural, economic, legal, and political status.   My third book, co-edited with Susan Klepp, is an edition of The Diary of Hannah Callendar Sansom:  Sense and Sensibilty in the Age of the American Revolution, with interpretive chapters exploring Sansom’s world.  I was lucky to work with terrific university press editors on each of these, and with two marvelous co-editors in Cathy and Susan.  The three books all focused from one vantage or another on Philadelphia in the pre-Revolutionary and Revolutionary eighteenth-century.

I’ve also been thinking and writing about the centrality of family as a concept and as an experience that shaped the early modern Atlantic world.  You can find some of my thoughts in the History Compass here and, in an Introduction to a special issue of the William and Mary Quarterly, co-authored with Julie Hardiwck and Sarah Pearsall, here.  I’m finishing a book on the significance of genealogy in eighteenth-century British America.  A version of the first chapter of the book is here.

Since 2004, I’ve been a professor of history at William & Mary.   I’m lucky to work with a great group of colleagues, and to teach and learn from terrific students.

And, since 2013, I’ve been Director of the Omohundro Institute of Early American History & Culture.

I write for the Scholarly Kitchen and in other online venues.

Ask me about ORCID!